The US media is making money like betting viewers of a dogfight in Ukraine than journalists covering the war on this International Women’s Day.

“But when the American media covered the United States war in Afghanistan and the US invasion of Iraq, it was more like bored bystanders watching a garbage collection truck picking up garbage,” says Lana, an aid worker who drives a bus in Ukraine, taking women, children and elderly refugees outside the country.

by Melissa Hemingway and Katie Alsop

US media is making money as spectators bet on a dogfight in Ukraine. “Ukraine is leading our fight,” says General (Retired) Wesley Clark in a rare honest revelation for CNN.

America’s money-making media are more like betting on spectators at a dogfight in Ukraine than journalists covering the war on this International Women’s Day (IWD). Photo credit: adapted from the original 1868 work by James McCabe by Rosa Yamamoto / FPMag

“…Putin is likely to use a nuclear weapon somewhere,added General Clark.

“It is now more dangerous to be a woman than to be a soldier in modern conflicts”, said Major General Patrick Cammaert in 2008. He was the former commander of the United Nations peacekeeping operation in the Democratic Republic of Congo (DRC).

“On this International Women’s Day, women are livid to Joseph Biden, Vladimir Putin and Jens Stoltenberg who failed as so-called leaders to prevent this war in Eastern Europe,” said Dale Carter, Special Assistant to the Executive Director of the RINJ Foundation, a global organization for defense of women’s rights.

“This patriarch of butchers has nothing to cry about but a purulent evil, against which to protest. Joseph Biden, Vladimir Putin and Jens Stoltenberg who argued from November 2021 to February 2022 about America/NATO with the right to place missiles and troops on the Russian border in Ukraine are the real criminals and their organizations need to be decapitated to keep the world safe,” Ms Carter said.

“One of the most notable opponents of Joseph Biden, who would have been a much better choice for the American president,” said Monique Deslauriers of Calais Maine, RINJ’s executive director for the United States, “was Tulsi Gabbard. She correctly labeled this failed negotiation (which led to war) by Joseph Biden, Vladimir Putin and Jens Stoltenberg,” she added.
Watch the video:

“We demand that America stop supplying arms and macho lies to Ukraine and that armed fighters on the Ukrainian side and the Russian side immediately take their weapons to safety and stand down,” Carter said. RINJ Women, who has been urging leaders for peace in Eastern Europe and the safety of women and children, for months.

“There are more than two million displaced women and children inside and outside Ukraine and thousands more in dire straits. It’s the worst International Women’s Day in history and it’s about these three men. 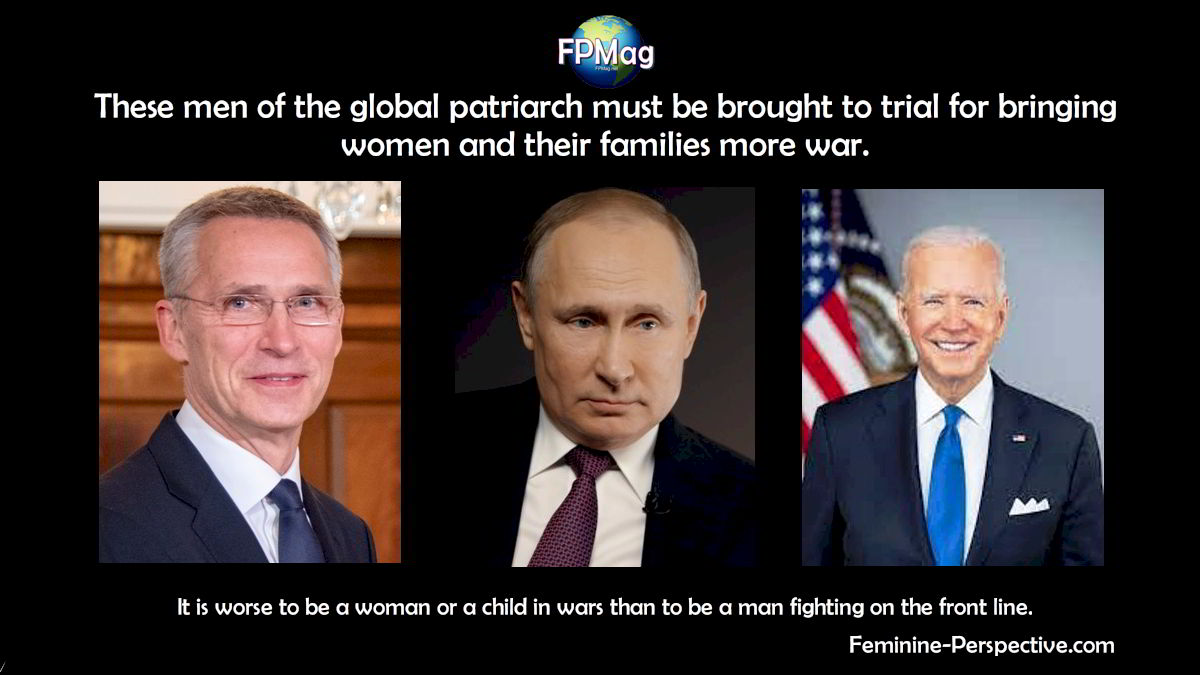 “Women need to stand up and defeat these three criminals and put them in jail,” suggested Dale Carter. “These men of the world patriarch must be brought to justice for leading women and their families to more war. It is worse to be a woman or a child in wars than to be a man fighting on the front lines. Photo credit: Official Photographs. Art/Crop/Enhancement: Rosa Yamamoto FPMag

aid agency CARE International calls on policy makers to “put victims before bureaucracy in the fight against rape in conflict-affected countries”.

Is the media driving a radical global response to the Ukrainian crisis, because people are white like Daniel Hannan of The Telegraph wrote: “The white Ukrainians we see on TV are just like us. They have Netflix and Instagram accounts.”

America glorified the American war against Russia waged in Ukraine. Controlled by the United States NATO had the possibility of preventing the Russian military operation by simply accepting that Ukraine would not be admitted NATO and so NATO weapons, missiles and troops would not line the Russian border.

These three men failed in this simple challenge of preventing war. Now they are waging war at the expense of women and children in Ukraine and around the world.